The placing of a commemorative plaque on the grave of  the Brisbane Botanic Gardens will be one of our main projects this coming year. Mrs. Barry and Mrs. Richardson recently visited the grave, which is situated in Toowong Cemetery with Mr. Caulfield, present Curator.

It proved to be a most interesting afternoon, as he later took us over the proposed new botanic gardens, which undoubtedly will be extremely beautiful. The location is a perfect one, and Garden Clubs can be assured of some wonderful field days in the future observing the development of Mr. Caulfield’s exciting plans. To return to the grave (not literally of course), it is in quite good repair and condition The monument will need some restoration work on the lettering for which we will obtain quotes. The President had an interview with Mr. Mattett of the Brisbane City Council Health Dept. He expressed his delight with our interest and offer of the plaque, and indicated that the Council will assist by recommending a firm which carries out Council work of this nature, thereby reducing costs considerably. It is envisaged that the finished article will cost between $3O—$4O. The inscription will be obtained from the following history provided by Mr. Caulfield. 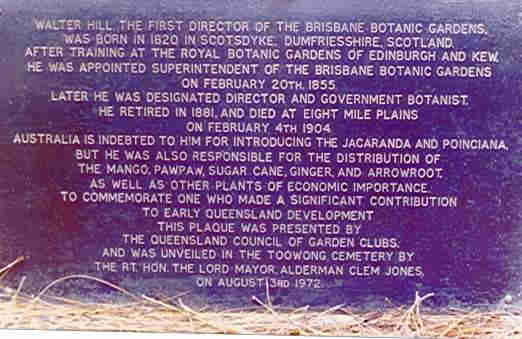 “Walter Hill, first Director Brisbane Botanic Gardens, 21.2.1855—1.3.1881.  Original appointment was as Superintendent. He was made Govt. Botanist in 1859. Hill was born at Scotsdyke, Dumfriesshire, Scotland in 1820.  He trained as a gardener and was on the staff of the Royal Botanic Gardens, Edinburgh 1841—43, and from 1843—51 was at the Royal Botanic Gardens, Kew, England. He was very active in plant introduction of both economic and ornamental species. He died at Eight Mile Plains on 4th February, 1904.”
Mr. Caulfield informed us that he considered Walter Hill had introduced many beautiful exotic trees into Queensland, possibly the very large Jacaranda growing in the Gardens as the ‘grandfather’ (or should it be ‘grandmother’) of all the Jacarandas now enhancing Brisbane by their beauty. We hope to include something of this in the inscription, as eventually, when the Toowong Cemetery receives its last interment, it is hoped to remove the monument to the old or the new Botanic Gardens for posterity.

It seems not so long ago — back in early August —that members from various clubs gathered in the Toowong Cemetery to see the Lord Mayor, Alderman Clem Jones, unveil a plaque honouring the memory of this man, the first Director (as he was then called) of the Brisbane Botanic Gardens. Many distinguished people were also present, and the grave surrounds had been most beautifully adorned by St. Lucia Garden Club with flowers and plants provided by Mr. H. Caulfield, the present Curator) who chose them for their links with Walter Hill. In the distance could be heard Scottish airs played by a piper, who preceded the official car as it drove slowly to the graveside. A wonderful morning, and one in which all members of the Council may take pride in remembering.
Back to QCGC Projects